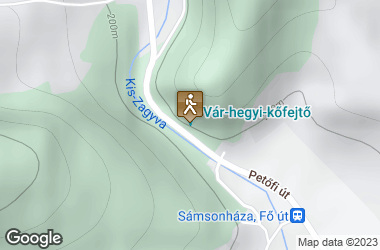 The formation near Sámsonháza is made up of shell and snail fauna containing internal mould assemblage with red alga incrustation drifted up as lumachella.

Formations of the Rakosi limestone formation normally appear as thick shelves and in a thickness of 50 to 60 m. It is most often seen on the southern edge of the mountain, in the line Ber-Bujak-Matraszőlős-Samsonhaza. Classical explorations can be seen on the Samsonhaza trail and in the Varhegy quarry at the northern end of the village. The lavaflow, which probably have flown into shallow water, overlies on freatomagmatic lapilli tuff. As a result of interaction between the lava and the wet sediments, bubbles were formed in the lava. This is topped with another volcanic-anemoclastic rock layer until the "upper andesite" lava rock and Sarmatian Leithan limestone are reached. From a lithological viewpoint, these are basaltic andesites with pyroxene and plagioclase content. Sometimes both pyroxene types – monocline and rombos – are present in the rock. within the administrative area of the village of Samsonhaza, right on the northwest verge of the village’s inner area and opposite the parking lot belonging to the one-time quarry of Samsonhaza, which is now a nature conservation area. By its cave cadaster, the hole belongs to the area No. 5223. This double hole was opened up in a small quarry, at a relative height of 8-10m from the River Kis-Zagyva (ca. 200m above sea-level. Considering its rock type, the hole was formed in pyroxene-andesite deposited onto early Miocene Schlieren (marl and clay containing echinoids), and that layer is covered by Laita limestone.