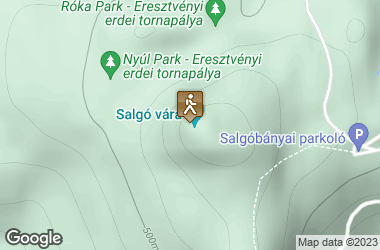 The volcanic formations of Nograd–gomor basalt country, which fall within the borders of Hungary, represent a wellidentifiable type.

Basalts in Salgo containes a few centimeter big rock enclosures (peridotites, pyroxenites), which all come from that depth (Szabo & Taylor, 1994; Kovacs et al., 2004; Kovacs & Szabo, 2005). Salgo castle, stands on so-called sack basaltic columns which were shaped by the fluctuating temperature typical of the ice period. The basaltic coloumns are special scientific features, real rarities, for the cooling shrinkage is experienced primarily in basalts. Various forms deriving from explosive and lava spitting volcanic activity can be observed here, offering a great opportunity for a volcanological study tour. One of the oldest of the basalts tested for age is the neck of Salgo or Nagy-Salgo: 5.2 million years. In the course of eruption, a ring-like trench was formed from glowing rocks and volcanic ash, with a crater at the centre. This was penetrated to and then filled up by hot masses of lava, which shaped up massive, horizontal or slightly slanted, bagged basaltic columns. After the eruption pyroclastics of the more easily erodable trench ring together with the surrounding anemoclastic rocks eroded down to the vent level.. As far as the economic importance of basalts is concerned, the basalt explored here used to be one of historic Hungary's favourite building materials. It was used for construction of fortresses like Salgo, Somoskő in the Middle Ages and as of the 19th century, roads were built with it. Still there are a lot of roads paved with this stone, called "cat stone" in Hungarian. The reason for this strange nickname may be that the best stones were explored in Macskalyuk [cat's hole] quarry which is now on Slovak territory. Salgo castle was built in the early 1500s and was possession of Balassi Balint for a while. Salgo castle also inspired the great Hungarian poet, Petőfi Sandor who payed a short visit to the building on June 11, 1845. He writes, " There might not have been another castle in Hungary so close to the stars, like Salgó. I sat on its tallest tip for long: my eyes travelled miles and my spirit centuries away".