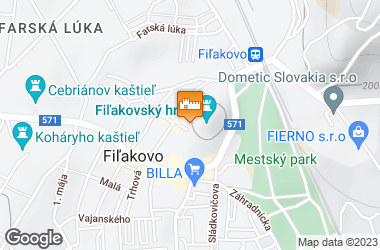 The castle hill, together with the nearby Červeny vrch Hill are remnants of two volcanic craters (maars), built by the lapilli tuffs (volcanic ejects of the pea size) and basaltic scoria dipping toward the former crater centre.

The slide features and faults testify the seismic disturbance during the volcanic activity. The scarce basaltic bombs with the concentric structure and fragments of the baked Early Miocene sediments with limonite crust can be found locally within the lapilli tuffs. On the basis of their relation to river terraces, their formation during the Quaternary is supposed. In the town, there is a well with mineral water coming to the surface along the deep fault. The town surrounding the castle was originally an extramural toll collecting settlement. The first record comes from 1255. The settlement was proclaimed a town in 1423. First record concerning the castle was written in 1246. Formerly a royal castle, later it was owned by Csakys, Bebeks, Perenyis, Koharys and Coburgs noble families. In 1451 the castle was captured by Jan Jiskra, in 1554 by Turks, who kept it until 1593 as the Filakovo sandzhak (headquarters), from which the Turks ruled a part of southern Slovakia. After being captured by Tokoly in1682, the castle was devastated.

House of the Geological Miracles

The rhyolitic tuff of Kazár

The Egidius Spring of Buják