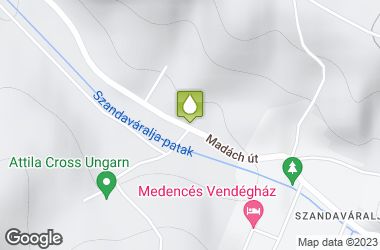 Szandaváralja is located inside the volcanic Cserhát, at the northern foot of Mount Szanda.The peak of Mount Szanda (529 m) is the second highest point of the Cserhát Mountains. Outcrops covered with forest and dotted with fields surround the small villages enclosed in the valleys, which are organically intertwined from two parts of the settlement, each rich in special monuments.The black color of the pyroxene andesites in Csehát is caused by the glass and / or magnetite content of the feldspars in them. The glass of andesite in Sanda also has needle-shaped iron-titanium oxide inclusions, which makes the rock extremely resistant. Beneath the castle, in a south-eastern setting, lies perhaps the most interesting sight: the three- to four-story high, approx. Andesite column wall with a 75-degree slope, demolished by quarrying. Unlike the andesite slide, which consists of curved columns in the nearby Bér, they are straight, breaking into the sky.

Here, on the side of the castle hill, are the orchards from which the raw material for the jams of Szandaváralja comes.All three peaks of Mount Sanda have played an important role in the history of the area: once there was an earthen castle in the west, the central pilgrimage site, both mined for andesite, and the 529-meter-high cliff to the east is the ruins of the Sand Castle. easiest to approach. The small Palóc settlements at the foot of the mountain also preserve the culture of their ancestors in their built heritage and family traditions - including the gastronomic and cultural traditions of ‘palóc’.
Viktorné Benedek Boglárka, the maker of GEOfood's branded Szandaváralja jams, works in this environment, making her jams from the fruits of Szandaváralja's orchards based on what she learned from her parents. During the family business, her husband deals with agriculture and the care of the trees, while Boglárka makes the jams, which are then bought by the tourists who come to the settlement, as their house is located directly on the National Blue Tour.

The raw material of the jams itself comes from the orchards of Szandaváralja, which are located on the side of Vár Hill. Indigenous Hungarian fruit varieties are grown in these orchards, which have been characteristic of the area for centuries.


Over the centuries, the Palóc community in the area has traded not only the fruit-growing tradition but also the fruit processing from mother to daughter - so the quality of the fruit is influenced by the andesite soil, the high number of hours of sunshine and the special microclimate. made according to gastronomic traditions, from this, special, "homemade" all jams.